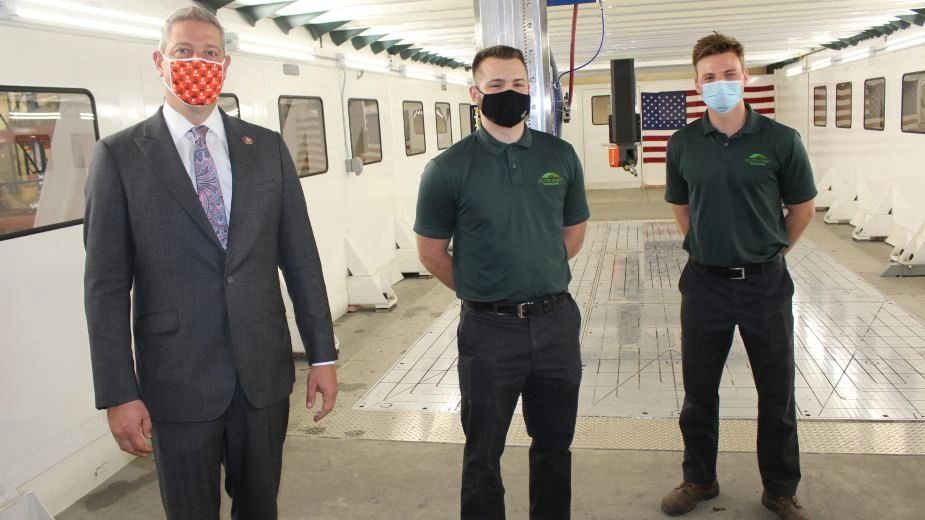 YOUNGSTOWN, Ohio – Matt Heffinger of Salem thought he’d have to relocate to a major metro region perhaps hundreds of miles away from the Mahoning Valley to put his engineering degree to work.

As it turned out, he didn’t have to look far at all.

Instead Heffinger, a recent graduate of Youngstown State University’s additive manufacturing program, seized an opportunity at Center Street Technologies, home to one of the largest and most sophisticated 3D printers in the world.

“Being able to be involved in something like this is exactly what I was looking for,” he said.

Heffinger was graduated in May 2020 and worked as an intern at Center Street for about a year before he was hired on full-time just after earning his degree. “The first time I walked in here and saw this machine, I thought to myself I have to be a part of this.”

Center Street and the National Center for Defense Manufacturing and Machining, based in Latrobe, Pa., yesterday received $9.4 million in federal funding to support work in additive manufacturing for the U.S. Department of Defense.

“Being able to maintain my roots and stay around here for a career is really rewarding to me,” Heffinger said. Another YSU graduate, Alex Fitzgerald of Warren, was also recently hired at Center Street Technologies.

Attracting and training young people to this form of manufacturing is a core component to what the company and other partners are trying build for the future of the Mahoning Valley, said Center Street President Michael Garvey. “It’s our intention to use the talent here in Youngstown,” he said. “We’re convinced that we can re-skill different people into this technology and create the jobs we’ve all been talking about.”

Check out the full article written on Thursday, October 15, 2020 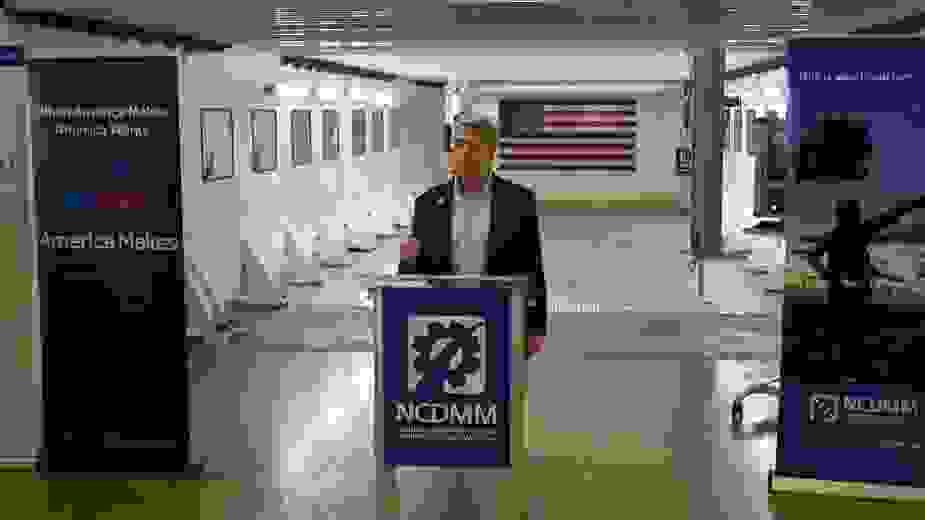 YOUNGSTOWN, Ohio — When Alex Fitzgerald first laid eyes on the massive 3D printer at Center Street Technologies – large enough to enclose a Ford F-150 pickup truck – moving back to Youngstown to work was a no-brainer.

“Once I saw it, I couldn’t say no to it. It’s amazing,” Fitzgerald says.

After graduating from Youngstown State University in 2018, Fitzgerald took a job as a project engineer for ExOne, a provider of industrial 3D printers and services based in St. Clairsville. It was a natural first step, he says, because he had worked with some ExOne systems while studying additive manufacturing at YSU.

Last February, Mike Garvey, president of M7 Technologies in Youngstown, invited Fitzgerald to visit Center Street Technologies on Ohio Works Drive to see the printer that can handle builds of up to 60,000 pounds. Fitzgerald jumped at the opportunity to work for Center Street, he says, and is now its additive- manufacturing engineer.

“I just wanted to be back home. It’s a great place to be,” Fitzgerald says.

A year before he graduated, he didn’t think there would be many local jobs available, he admits. After doing some research, he found “there’s actually a ton of opportunities for students graduating,” particularly in additive design, materials and research.

The printer at Center Street Technologies is “a great representation of the Youngstown ecosystem,” he adds. Several area companies were involved in its development, including M7 Technologies with its machining capabilities and Strangpresse, which provided a background in extrusion. After two years of research, design and execution, the large-scale printer is now complete and will be at the center of the second phase of the AMNOW project, which is assisting the U.S. Army in transitioning to additive manufacturing technology in its supply chain. AMNOW recently received $30 million in federal funding.

Check out the full article written on Thursday, December 19, 2019 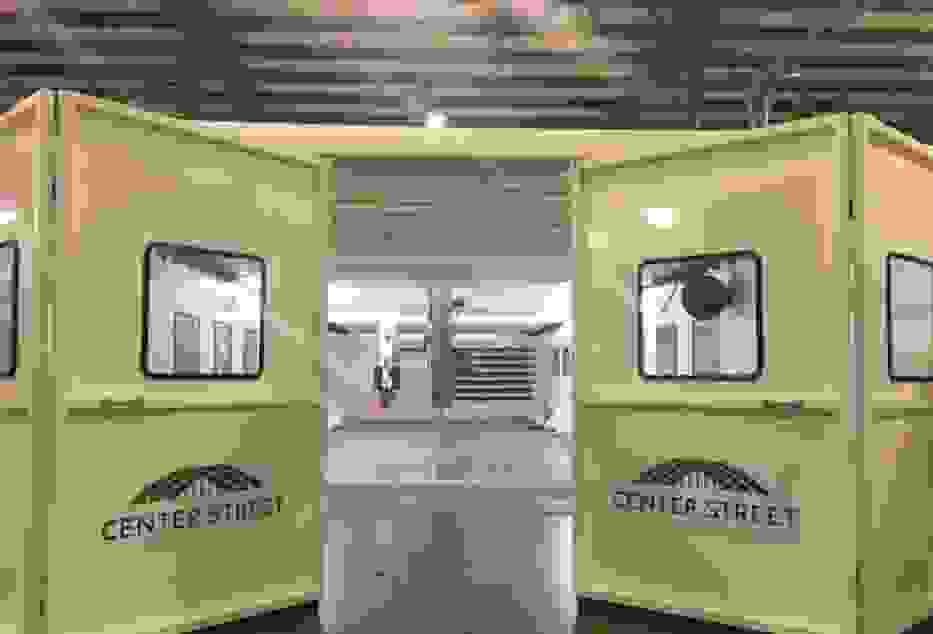 When you talk about this area's connection to 3D printing technology, maybe you should think big. One of the biggest 3D printers on the planet is right here in Youngstown.

It almost looks like some kind of spacecraft inside Center Street Technologies in Youngstown, but it is actually just a very large 3D printer.

When asked why the company wanted to build something this large, Alex Fitzgerald replied, "Our answer we always say is why not? "

In terms of the nuts and bolts, it's legitimately just a much, much larger version of any other 3D printer you've seen, although this one is also one of the world's largest hybrid machines, meaning it can build material up and also take it away.

It's the brainchild of Mike Garvey from M-7 Technologies and Chuck George, the CEO of Strangpresse, a company inside the Youngstown Business Incubator.

"It's a good representation of Youngstown; everyone collaborating together to make a great machine," said Fitzgerald, an additive manufacturing engineer with Center Street. "I think that's what puts us even farther ahead, is just the expertise that's involved."

"Big, large parts. You can even make car-sized parts. You can climb into a car that you've printed on this machine," said Alex Roschli with the Oak Ridge National Laboratory, a science and technology lab sponsored by the U.S. Department of Energy that's also involved in this project.

Projects with this machine may seem like they would take a long time to build, but they come together faster than you might think.

"Our goal is always bigger, faster, cheaper... With machines like this, you can do over 100 pounds an hour whereas a traditional desktop printer that everyone's seen, you're doing maybe a pound a day," said Roschli.

Still, even though it's impressive, this is also very new for everyone involved, so they are still feeling out the capabilities.

"You're in a whole different ballgame that's no one's ever been in. We get to write our own story at this point and kind of take it where we want to go," said Fitzgerald.

"It's definitely a new technology and changes the game, so I think adoption's been pretty slow to get started just because it's so unique and so different that what manufacturers are used to traditionally doing," said Roschli. "To make an automobile, they're used to buying a huge chunk of metal and cutting it down to the size they need, whereas this kind of goes the opposite way. You're building up apart. You're additive manufacturing; you're adding material to grow it to the size and shape you want."

Check out the full article written on Thursday, February 19, 2020